Our President Erdoğan continues his services in the construction of a Strong Turkey. Focusing on national and domestic production, Erdoğan fulfills his employment targets one by one. Our President will undoubtedly carry Turkey to the first place in the field of agriculture with his “National in Domestic Production in Agriculture” moves. Although we are currently backward in terms of agriculture from countries such as India etc., we are in a geography rich in land and yield. In terms of climate, we are much more fortunate than India. Our president will do what is necessary. The Economist magazine reported the wheat spike as a skull in May. Illustrating the future of a possible food shortage, the magazine also leads us to strong production and food strategy innovation. 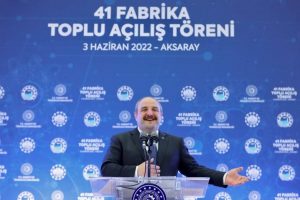 41 OPENING CEREMONY OF THE FACTORY.

NEWS OF THE MINISTRY OF TECHNOLOGY: Minister of Industry and Technology Mustafa Varank made the mass opening of 41 facilities with an investment value of 800 million TL in Aksaray. Stating that these factories will create employment for approximately 2,500 citizens, Varank said, “Our 41 facilities operating in many fields from electronics to machinery, from pharmaceuticals to chemistry, from food to textile, will improve the production and export capacity of our city and country.” Minister Varank made the mass opening of 41 facilities in Aksaray. Stating that the investment value of these facilities has reached 800 million TL, Varank said: ”

2 THOUSAND 500 EMPLOYMENT: As always, we as the state have stood by our investors in these investments. We have issued incentive certificates for almost all of our 41 facilities. These factories will create employment for approximately 2,500 of our citizens. Our 41 facilities, which operate in many fields from electronics to machinery, from pharmaceuticals to chemistry, from food to textile, will improve the production and export capacity of our city and country.

INVESTMENT, PRODUCTION, EMPLOYMENT AND EXPORT: Turkey’s route is investment, production, employment and export. The way to become one of the top 10 economies in the world is undoubtedly through here. In this sense, I would like to express my gratitude to all our investors who continue their investments by trusting their country in such a period when energy prices, commodity prices and transportation costs are increasing, and who are laying the stones of the road to a great and powerful Turkey.

142 PROJECTS, 76 MILLION TL SUPPORT: With our Ahiler Development Agency, we have provided approximately 76 million TL support to 142 projects of our organizations at fixed prices. God willing, we will start the project named “Anatolia’s Beautiful Homeland”, which we see as beneficial in terms of Aksaray’s tourism performance, within this year. With the project, a tourism campus with various social facilities will be built, the High Church will be illuminated, and the Historical Seminary building, known as the Old Karballa Hotel, will be operated as a tourism facility.

143 PROJECTS, 314 MILLION TL RESOURCES: On the other hand, we continue to invest in development in Aksaray with our KOP Administration. Since its establishment, our KOP administration has transferred 314 million liras of resources at fixed prices to 143 projects in various fields such as agriculture, animal husbandry, culture, tourism and energy.

WE ARE BEHIND YOU: We have provided nearly 200 million liras of credit support only for Aksaray OIZ. In the last 7 months, we have completed the establishment process of 3 new OIZs. No one should doubt that we will be behind you in the projects to be carried out in our OIZs. When these new OIZs are fully operational, 7,500 more people will be employed.

ANATOLIA’S SHINING STAR: Turkey is much stronger today than it was yesterday. It is the safe harbor of the world. Those who invest in Turkey have never regretted it, on the contrary, they have achieved significant gains. I would like to take this opportunity to address our entrepreneurs once again from Aksaray, the shining star of Anatolia. Come and invest in Turkey’s bright future and strong future. Both you and our country will win.”